Rehabilitation on a horses chest

This is the view of the front of the horse, same pictures were taken three months apart.

These pictures show the importance of the front part of the horse mainly working on the thoracic sling and the surrounding muscles, as the horse relies on the muscles to stay suspended in the chest – there is no bone connection, like in humans.
This is crucial for shoulder/ wither lift, base of the neck gets support,the neck comes in a more horizontal position, the poll is the highest point.
Lifting the front creates room for the hind legs, freedom to step forward, this helps the horse to coordinate his back muscles and carry himself easier, in self carriage and becomes lighter.

In the first picture you can see the restriction in his chest: 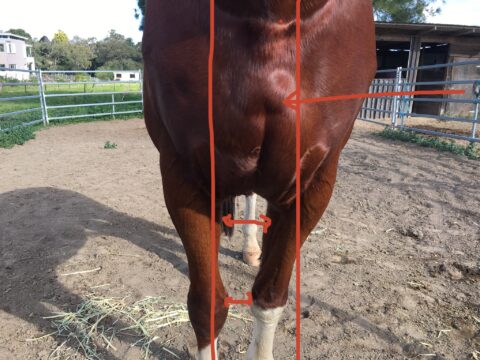 There is a bulge in the middle of the chest where the horse has dropped his chest.
His sternum is pushing down.
The shoulder is down and he was also extremely ‘girthy’
You can see how close his legs are together and how both of them are getting narrower towards the base.
One leg is further back and the other one more in front.
There is not enough room for the hind legs to come under.

The whole picture looks very restricted and this horse found it difficult to move and stay balanced.
He was not having the full range of motion, his stride was short.
This is mainly felt in the canter, as it was extremely difficult for him to maintain the canter … it felt very laboured.

In the second picture you see a very different looking horse! 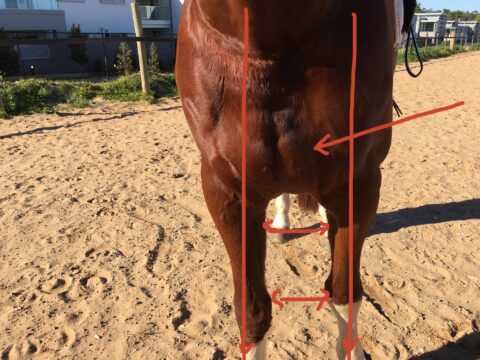 His chest has evened out, the bulge is barely visible and his muscles are wider and more even
His sternum is lifted, his base of the neck is wider and his suspension is lifted.
His legs are further apart from the top, as are his knees and the base.
He has an improved balance over all four legs

With this he became much lighter in the contact and softer on the leg aids, as he was able to stride out.
As his hind legs had more space to step through and engage the back engine
His whole carrying power improved, as his back started to lift in the process
You can still see that one front leg is further back than the other, but the all over picture is broader and wider.

Time and patience were the key, as the contracted muscles needed time to relax and stretch.

Most of the work I did was in the walk improving his body to realign vertical, horizontal, lateral and diagonal, allowing his core stability to strengthen……Step by step.

It was about teaching him specific exercises, so he can perform functional movements.

Please read my other post on Rehabilitation on a horses back

Horses and the Tower of Pisa Jackpot! Recallable aids – for horseriders

Understanding the horses the hyoid apparatus

Horse welfare – A Game of Margins