Rehabilitation of a School Horse

Case study- the rehabilitation of a School horse
Every Horse matters- especially a riding school horse!

He is everybody’s best friend, loves to please and is always willing to work.

Unfortunately, the gait he chose to use was not the most sustainable/ suitable for his own longevity.
His demeanour became nippy, cranky – and he became pushy to handle on the ground.
A classic case of “sour” with the work as a school horse.
Under saddle, Charon felt like riding three horses at once- the front, middle and the back.
Eventually things started to fall apart physically.
He was lame in front, sore in the back and twisting his hind legs.
The Vet wasn’t sure which leg he was lame on.
It basically was a combination of everything.

So the challenge was on.
Luckily, he had a very understanding owner, who gave him an excellent chance to go through a measured rehabilitation process.

Time off, with slow and steady in-hand work.
Teaching him to take one step at the time, whilst lifting his shoulders and his core.
Constantly reminding him to carry the weight on his hind legs, which required lots of patience, with all his body parts working in the same direction.
Learning to lift his withers to open the chest up.
Not throwing himself forward onto the forehand within each stride – and hoping his hind legs will catch up to his front end!

I had to teach him he had to wait for his hind legs to track up, whilst maintaining a lifted back, raising the withers and opening his chest, in order to have room for his hind legs .
The process was akin to watching grass grow, slowly, step by step….
Then,he was understanding the idea.
He was ready and eager to work, the next day and the next!

His character and beautiful attitude helped in the rehabilitation process.
Charon started being delightful with his ground manners, physically and mentally he improved.
I started to introduce Shoulder-in, Travers and turn on the haunches.
His whole body posture changed – and he became a proud horse.

Watching him walking in the paddock, he started to practise by moving himself in a balanced gait.
His strength returned and he became more rideable.

So, now I started the same work and progress under saddle.
Again, step by step, waiting, holding, relaxing.
No more rushing.

As we were breaking old habits, more patience was required, but he had a great idea already from the in-hand work.
His understanding of the foundations was already established.
When I then introduced lateral work under saddle, he literally took it all in his stride.

He was use-able as a school horse once more.
He is used in private lessons again.
The feedback and praise he receives is amazing post rehabilitation.

He is a smooth ride now and does not feel part camel!
Maintaining his improved gait with different riders will be the next challenge!

Below are a few pictures from the beginning of the rehabilitation 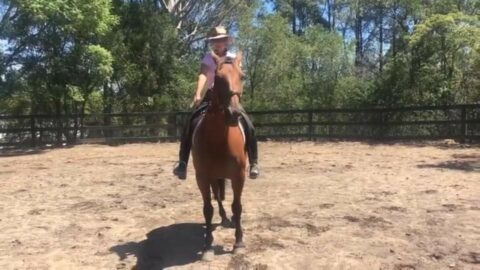 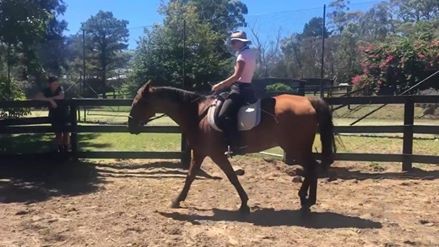 A few thoughts on Trust and partnership,

Riding is a partnership and as with any partnership, there are little “nuisances” to be gotten through that are needed to create trust!

• Balancing your horse from front to back, to be even over all four legs, as well as from side to side.
• Being aware of just where are the horse’s shoulders and hips, spinal alignment, wither lift, rib cage rotation, as well as a balanced, even strength and carrying power over both hind legs….. and the ability to use the haunches.
• Using different exercise patterns movements and riding lines to create, restore or enhance alignment – all gives you a more even balanced horse.

• Sitting in the middle of your horse, balanced evenly through your seat – using your poise to stay light and moving with your horse’s momentum….as well as (of course) not allowing tension to set in!
• Allowing and encouraging a playful attitude towards exercises, away from endless (boring) repetition and patterns
• Riding with feel and mindfulness to set the horse up for success.

This partnership and trust means also being aware of mood swings- Yours and Theirs!

It’s not avoiding conflict because I am weak, it is teaching my horse he is safe with me
I truly listen to my horse.

It’s so rare for a willing horse to refuse, so- always pay attention to little mood changes.
Be in the’ here and now. enjoy your riding.

To be tense, angry or afraid creates a conflict with your horse.
Horses are more tuned into our mood swings then we give them credit for!

In a discouraged horse, it is harder to bring their trust back, than to just take a little more time to figure things out……and remembering to reward every little step in the right direction.